So many reasons to celebrate! October 30th Recap

So many reasons to celebrate! October 30th Recap

Last Friday, October 30, 2015, 113 women met at Huron Hills Church in Ann Arbor for its most recent night to gather, learn, give and celebrate the joy of empowering women living in extreme poverty. The evening began with an introductory video presenting background on the practice of genital cutting, still a part of the culture even in some of the more progressive African countries like Kenya. So ingrained is this centuries-old tradition that parents not only allow, but encourage their daughters to undergo the painful and dangerous process so they will be fit to enter into traditional marriage roles. In the opening video, however, attendees were reminded that in the past few years, voices have arisen against the practice. One of them, Sister Fa, 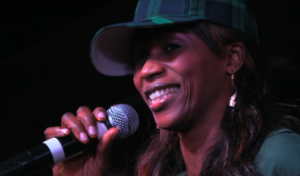 a Senegalese musician featured in the video, continues to travel outside of Africa, writing and singing songs in support of education and change in this area. iZōsh members remembered Sister Fa as one of the artists featured in Sophia Kruz’s presentation of her documentary,”Creating 4 Change” at the iZōsh event last March.
Following the video, Robin Phillips, Chair of iZōsh, described the mission of iZōsh for the members and guests. Briefly, iZōsh is modeled after a savings group concept, and seeks to provide microloans to women in extreme poverty. With the empowerment of having their own finances, they are able to educate their sons and daughters to rise above the ancient practices, and avoid the culture of oppression and exploitation that has been the lot of so many women. 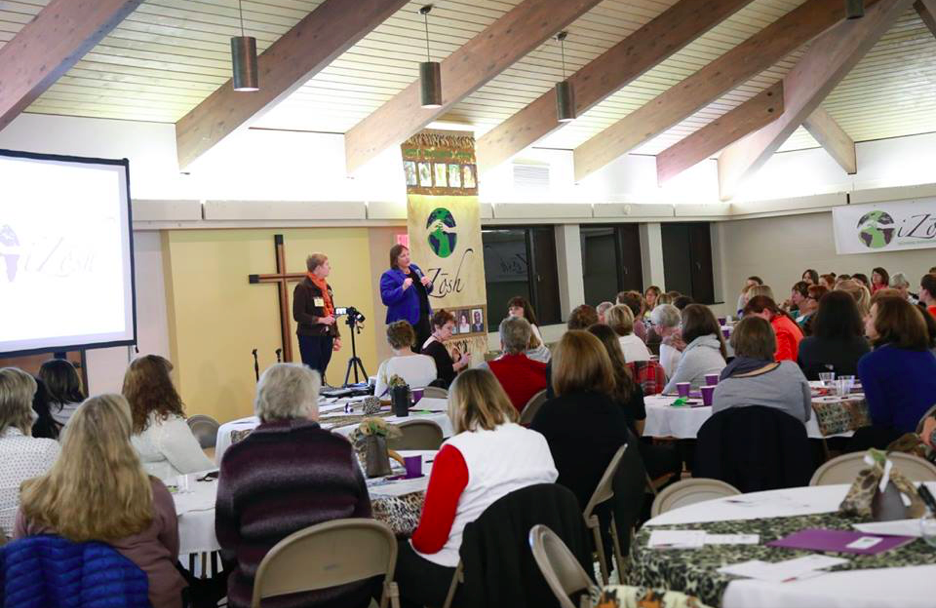 Following an ice-breaker discussion during which attendees were encouraged to share any age-related traditions and “rites of passage” in their own families, the evening’s speaker was introduced. Margo Day, Vice President of U.S. Education for Microsoft Corporation, spoke on the topic Building Hope: Progress in the Eradication of Female Genital Mutilation. Following a sabbatical year, 2009, in rural Kenya, Margo Day was instilled with a passion for making the world a better, safer place for the girls she met there, and also for girls in other countries who were forced to undergo the “passage into womanhood” that placed them in such danger. While visiting a water project north of Nairobi she learned of a rescue center nearby which housed 34 girls who had refused cutting – and therefore marriage, separating them from their families. She learned that these girls were determined to have a better quality of life, but that they also had a fierce desire to be loved and valued. They were asking only for the opportunity to be educated. Since there were no secondary schools for girls in the area (the culture sees no need to educate girls) Ms. Day coordinated raising $400,000 in 9 months to build a school. From the original 34 students, enrollment has now grown to 383 girls, most with the support of their parents. Given the gift of love and opportunity, these girls have found their voices and become confident women.

World Vision has assisted in the process by going into villages and convincing their chiefs to support education for all children, making them the leaders in this new direction for their followers. Community women celebrate as girls reach new milestones, with alternative events like graduations replacing the old traditional rites of passage. They have been “allowed to become people,” as one student put it.

During a Q and A period, Margo Day was asked about problems that have arisen. One asked, “what about the boys?” Margo responded that, while many initially wanted to marry girls who had been cut, they have been educated about the terrible dangers of the practice and are coming around. One village saw a group of young men signing a pact to marry only girls who had not been cut! Other obstacles involve kidnapping of girls who have tried to leave, and some opposition from tribal leaders, but all are being dealt with, with some success. In Kenya, the momentum is strong for change. The long-term benefits of eliminating the practice of female genital mutilation are slowly becoming apparent, and more and more girls are being educated.

Ms. Day’s excellent presentation did a fine job of clearly defining the pathway from empowering women financially to making them able to educate their children, and ultimately helping women and men to see that dangerous and unnecessary practices, however traditional, need not continue. 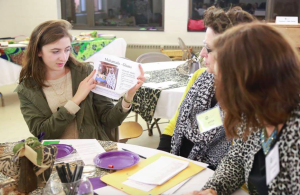 Following Ms. Day’s moving presentation, it was announced that $12,135.00 had been collected that night for immediate distribution to women in remote areas around the world for use in their businesses. In a round of “table voting,” additional women were chosen for funding, to be added to those chosen earlier by members. This process brought the evening’s total to 31 women who will now be supported by iZōsh funding. 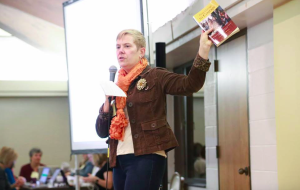 The book selected for the evening’s table discussion was From Outrage to Courage, by Anne Firth Murray, a professor at Stanford University. The book gives a clear and inspirational analysis of how the abrogation of women’s rights around the world should be a central issue for everyone concerned with human rights. She offers examples of what good can be achieved when people care, and how change can be created, focusing on grassroots initiatives and their impact. At one table, guests speculated on how husbands’ roles might change as women become empowered, and on how boys can now grow up with new perspectives.

In the final reckoning for the event, it was announced that with that evening’s collection of contributions, iZōsh has surpassed the $100,000.00 mark in investing in the world’s women! This announcement was met with cheers, tears, and dancing in the aisles as a video of African women dancing for joy played on the screen. What an accomplishment! And we were reminded of how the process works: that for every dollar invested, paid back, and “recycled” to other recipients, the investment grows sixfold! 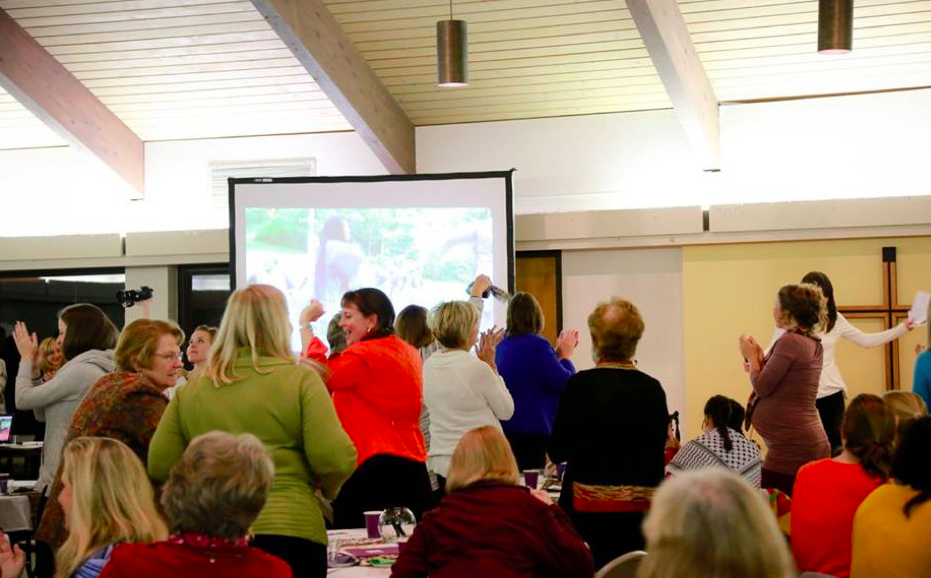 There was yet another milestone of progress reported. iZōsh International has been formed with its purpose being to replicate iZōsh, Women investing in Women, in other Christian churches. This would further multiply giving of micro loans for women living in extreme poverty. 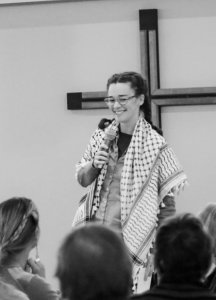 The record-setting evening was concluded with a poem called Birthday Poem for Niara, by Kaitlyn LaMoine Martin, who read her own work. Ms. Martin’s poem, which follows, was written for a five year-old girl, and she said the same words are relevant for the women that iZōsh has empowered:

“You are a magical garden. You are your own roots. Plant seeds inside yourself. Water them with your breath. Stretch fingers skyward so when your dreams start to beanstalk up your legs they have plenty of room to climb. Unfold your wings like origami so they hold you during flight. Listen to the wind beside you, the voices before you, lending their song to the harmonica in your throat. Grow toward the tree tops, feel the bend and sway beneath your feet. Taste the lullaby in your name, the tsunami your tongue holds back. Take time to smell yourself. The Earth of your toes, the midnight of your heart. Find the snail shells behind your ears, then, turn toward the sun, toward the lake, toward the moon. Soon. Bloom.”

The next iZōsh event will be Friday, April 22, and the speaker will be Christine Chan Downer, formerly of the U.S. State Department Office to Monitor and Combat Human Trafficking.

Our Treasurer routinely performs extensive checks and balances both during and after every iZōsh event. During this most recent post-event check, the Treasurer discovered a discrepancy (an Excel formula calculation error) indicating that more money had been originally donated than was announced Friday night. After the new donation total was verified, the Treasurer and Loan Officers convened to fund additional loans with the incremental dollars.

We consider transparency in handling our members’ donations to be paramount, and want to assure you that this experience will help us to improve our practices going forward. 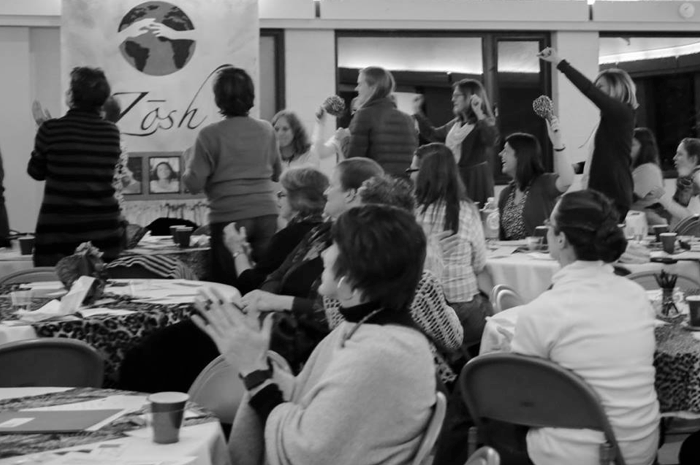