The iZōsh Event last Friday night was a powerful and fun-filled evening! 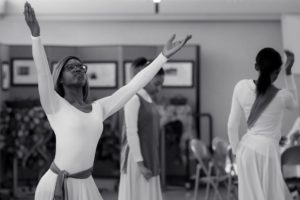 Following a welcome by iZōsh Chair Colleen Dauw, the iZōsh gathering of 107 women opened with an inspirational presentation by Images of Praise, a dance troupe auxiliary of the Michigan Gospel Chorale. Colleen then went on to describe how iZōsh works, accompanied by a brief video. iZōsh is modeled after the savings group concept, in which micro-financing is given to women in third-world countries and recipients are chosen by iZōsh members and guests. iZōsh works in partnership with a number of international organizations, including Kiva, Opportunity International, World Vision, and most recently, Healing Hands of Joy. Huron Hills Church covers all administrative expenses so that 100 percent of money raised goes directly to fund micro-loans for women in poverty. Colleen introduced some key players in iZōsh, including Treasurers and Loan Officers, all of whom donate their time to this organization. 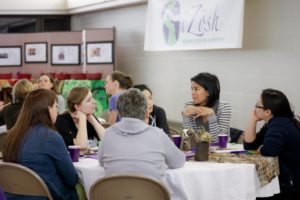 It was announced that prior to tonight’s meeting, $4,895.00 had been collected from members who could not attend but sent their dues in ahead of time. This was followed by the collection of dues and gifts at each table, during an ice breaker activity that encouraged attendees to share the first thing for which they had saved. This led to lively discussions around each table, while iZōsh treasurers collected and began to count the money. Katie Glupker, Vice Chair of iZōsh, described how members can propose loan recipients prior to the Events, and the results of the first round of voting were announced. 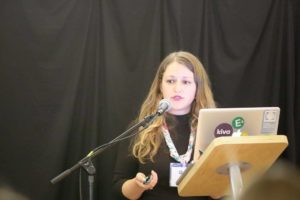 iZōsh Education Committee’s Melodie Marske introduced the keynote speaker for the evening, Kari Derenzi, a volunteer with Kiva. Ms. Derenzi’s responsibility is to manage and translate some of the micro-loans given through Kiva to recipients in the 82 countries in which Kiva operates. She first described some of the problems encountered in making these loans. “Dreams are universal”, she said, “but opportunities are not,” and there are multiple issues involved in connecting the lender to the borrower. Kiva envisions a world where all people hold the power to create opportunities for themselves and others, even in the most remote areas of the globe.

Kari summarized the history of Kiva since its beginning in 2004 in Bangladesh, and mentioned that on March 8 of 2017, International Women’s Day, they had their biggest lending day ever. Kiva is considered a pioneer in crowd funding for international businesses and has been gratified to find that the poor of these countries are actually quite creditworthy. To date, Kiva has served 2.3 million borrowers in 82 countries, using funds from 1.6 million lenders for a total of $960.2 million dollars and an amazing 97.1 percent repayment rate! While the details can be enormously complex, the process is simple – choose a borrower, make a loan, get repaid, and repeat. The most important aspect, according to Kari, is that while you are funding a single borrower, the effects on the family and community are far-reaching. Repayments can be loaned again. An example was shown of funding for water filters in Cambodia which resulted in safe, clean water for an entire community.  Kiva attempts to reach the most “un-banked” people in very remote locations and has been successful in improving many aspects of their lives.

Members learned about the various roles that those interested in working with Kiva could perform, including traveling to remote locations to find and service the loan recipients. Kari herself had to travel 2 hours by motorbike to meet borrowers in Vietnam! The discussion was then opened to questions. Interesting points included the difficulties of applying the Kiva model to countries with widely different customs, and the requirements for regular on-site monitoring to prevent abuse. Borrowers often need to be supported in their businesses with education and prayer. 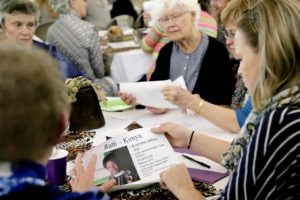 Following this discussion, during which treasurers were counting and recounting donations, iZōsh Treasurer Rachel Brock announced that a total $13,431 had been raised to spend that night funding micro-loans in real-time. iZōsh Secretary Dawn Perry announced the process of table voting to determine recipients of this loan money. While the chosen recipients were being funded, attendees were encouraged to discuss an excerpt from the book Portfolios of the Poor: How the World’s Poor Live on $2 a Day by Daryl Collins, et al., which was read aloud by iZōsh Education Committee’s Melodie Marske and Ruth Ann Logue.

Ms. Derenzi then answered some additional questions, clarifying how Kiva works, the role of field partners in diverse cultures, and the difficulties of dealing with 82 countries with 82 different sets of laws. 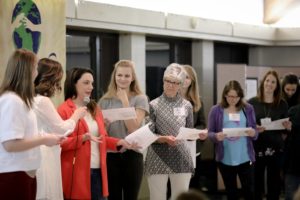 Once voting was completed, it was announced that the night’s funds had been allotted to 20 women, and the total funds disbursed since the inception of iZōsh is now a staggering $145,776!

Following some final remarks about membership and the iZōsh vision, the date for the next Event, October 20, was announced. Robin Phillips, president of the newly formed iZōsh International, announced that the first new chapter of iZōsh will be piloted in Portland, Maine. Information on iZōsh International and directions for starting a chapter are available at the website iZosh.org. The Ann Arbor chapter’s website is now located at iZosh.org/annarbor.