On Friday, March 16, 2018 more than 100 women came together at Huron Hills Church in Ann Arbor to continue the task of empowering women living in extreme poverty by providing micro-loans. These loans allow women in communities all over the world to pursue small business opportunities and improve their living situations, educate their children, and reduce the risk of oppression and exploitation of themselves and their families. This is the vision of iZōsh®. 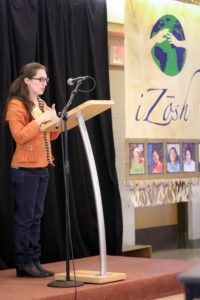 Ellie Collman welcomed the attendees, Johanna Ryan, Keynote Speaker for the evening, and featured artist Lea Bult. Vice Chair Katie Glupker described the theme for the evening, “Invest in Women to Secure the Future,” and went on to describe the role of iZōsh in the area of microfinance. iZōsh acts as the lender, and partners with NGOs to provide funds to institutions who coordinate small loans to women who have expressed a desire to begin or grow small businesses in their home communities. iZōsh partners with such portals as Kiva, Opportunity International, and Healing Hands of Joy, who distribute funds in the field. To date, iZōsh has funded more than 400 women. Katie also announced that Friday’s Event began with $4,430 having been received in advance.

The ice-breaker for the night asked women at each table to try to recall when someone had invested in them, perhaps taking a chance on them, and how that turned out.

Karen Peach announced the results of the stone voting, done by iZōsh members as they arrived. Through that process, micro-loans were approved for women in El Salvador, Kenya, Ecuador, and Cambodia. 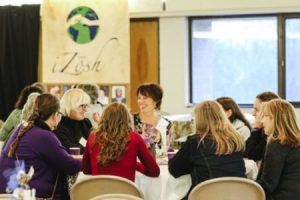 Robin Phillips, president of iZōsh International, then introduced Johanna Ryan, describing her background and training for the important work she is involved in. She is Global Director of Social Performance at VisionFund International, the microfinance arm of World Vision, where she oversees VisionFund’s 30+ subsidiaries, seeking to provide economic support to the most needy in the most efficient way. She has worked to promote the interests and needs of women globally through her involvement in various organizations. Johanna lives in London but travels extensively to the rural locations where micro-loans are given through VisionFund, and to speak to groups such as iZōsh.

Johanna talked about the differences that can come about when women in poverty are supported financially. Where many millions of women were typically excluded from financial dealings, they can now be empowered to take control of their own finances, better care for their families, educate their children, and improve their lives into the future. She emphasized the importance of women having the ability to make choices, and how empowering that is. She introduced the group to women in Rwanda and North Uganda whose lives were changed by being listened to, and served.

Johanna described how VisionFund recruits field officers who are then trained to assist women by lowering the barriers of entry to small business. Many times these field officers are prior micro-loan recipients themselves, so they have an intimate knowledge of the process, and can relate to future borrowers on a personal level. She described how being able to access the world of personal finance can have global impact; how it can lead to gender equality, lower incidence of child marriages, and better-educated children. 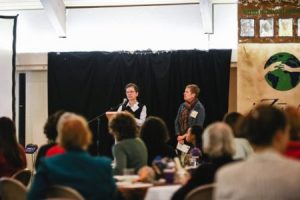 At the close of Johanna’s remarks she took some time to respond to questions, and the group learned about the repayment process. She mentioned that it is quite structured and rigidly applied out of respect for those who donate and need to be able to trust that their contributions are being properly administered. Johanna mentioned that the loans are rarely in default, and that with 1.2 million clients and 820 million dollars in loans to date, the repayment rate has been an astounding 98.37 percent!

Rachel Brock, Treasurer, announced that $13,176 had been raised that night. Leslie Wilkins, Marketing and Communications Officer, introduced the process of providing loans to a number of the women described in scrolls on each of the tables. In spite of how difficult it is to choose just one, this is the process. Attendees were encouraged to really see the women described, to read about them, imagine them, trust them to be credit-worthy, and make a choice. When the choices had been made, they were presented to the group as a whole. 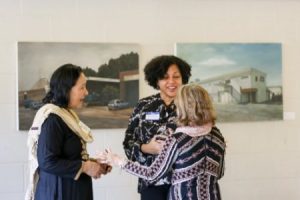 iZōsh Education Committee Chairs Melodie Marske and Ruth Ann Logue then introduced Lea Bult, an artist who has created a series of paintings related to human trafficking, using a particularly innovative method involving transparency that allows the viewer to get a glimpse into the suffering going on behind seemingly innocuous settings. The works are for sale, and Lea generously decided to share the proceeds of any sales that night with iZōsh.

A story entitled “Mushrooming Empowerment” was presented to the group and a brief discussion took place as the Loan Officers completed their work. Johanna returned to answer a few more questions, clarifying how World Vision and VisionFund use their resources, and how the actual savings groups in small villages might work for both individuals and groups of borrowers. She also told the group that often recipients of small loans are able to transition to applying to banks for larger loans, and they are encouraged by VisionFund to do that. They pay back their loans and, having now gotten on their feet, move on.

Vice Chair Katie Glupker described how one may become an iZōsh member. She announced the evening’s result: 37 women funded using the $13,176 collected, and sharing that during the lifetime of iZōsh 479 women have been funded through contributions of $179,269! Final announcements were made, and tonight’s attendees were asked to “save the date” for the next meeting on October 12, 2018 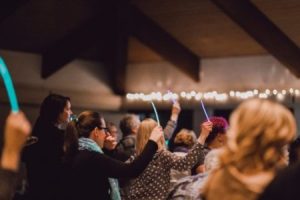