Last Friday we celebrated the most money given in a single iZōsh® Event since we began meeting in 2012. We are happy to report that $12,353 was generously given and $12,353 was generously sent out to 31 women around the world! Just over 160 women were seated in the auditorium of Huron Hills. Volunteers had transformed it into a beautiful space with tables and seating to accommodate our growing numbers. When the guest speaker, Vicki Escarra, entered the stage the room was noisy and energetic. Tables had been discussing the ice breaker question: “what is something important you’ve wanted but faced a large financial obstacle to achieve it?”. Most of us have experienced something we wanted but couldn’t have due to limited resources, but few of us have personal stories of starvation, abuse, or poverty as desperate as women in the developing countries. Vicki Escarra is CEO of Opportunity International, working to empower women 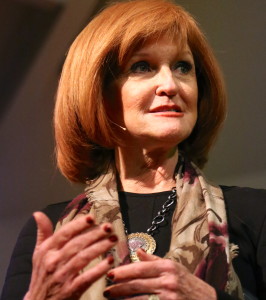 around the globe through partnerships with a variety of corporations and institutions. Vicki spoke on the importance of micro loans in a world where three quarters of the world’s poor have no access to a bank account. She shared that the recipients of Opportunity International’s micro loans have a 98% rate of return on those loans and that most loans are paid back within 6 months. The rate of return is so successful because when a loan recipient is funded by Opportunity International they are provided with community support, training and education. A very high return rate means every dollar given for funding microloans can be quickly reinvested when the loan is repaid. Every six months the money is paid back and reinvested, making the 26 million dollars invested in financing micro loans to the world’s poorest communities since Opportunity began its work 40 years ago has an actual value of 6 Billion dollars. Vicki showed a short video on the impact of micro loans through Opportunity International. The video was the story of a woman named Betty who farmed a small plot of land growing sugar cane to support her three children and provide for their education. As the video played it was heart breaking to learn that when Betty wanted to expand her farm she was rejected for a small loan by the local bank because she was considered “high risk” having no collateral. 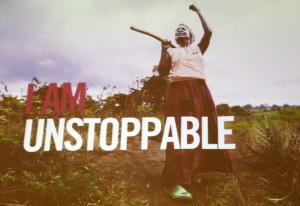 Hearing her story may have been heartbreaking at first but seeing the smiles of the entrepreneurs, Betty’s own children helping on the farm, and hearing them repeat the message, “I am impossible to stop!” left us smiling back with the hope and optimism shared in all of us that want to see a world changed. Vicki introduced us to our second guest speaker for the evening, her friend of 15 years, Carly Fiorina. Carly founded “The One Woman Initiative” an international women’s empowerment fund and also represents Opportunity International as Global Ambassador. Carly joined us by Skype. She spoke with conviction on the importance of women as a recourse underutilized around the globe from developing to industrialized countries. Women are less likely to have the opportunity for an education, less likely to be considered for employment and less likely to receive a loan from a traditional bank to create or expand a business. While she emphasized the struggle for women to achieve their potential, she also detailed the research showing women are more likely to reinvest their earnings in their family, in the education of their children and in the success of their community. 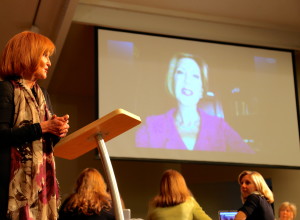 Carly shared her passion and the reason for her founding “The One Woman Initiative”, “When women are engaged, given the opportunity, everything gets better. When a woman’s potential is realized the whole world gets better.” Carly ended on a motivational message of hope: “Every single woman can in fact change her world, and when we work together we can change the whole world.” Vicki closed her address to the women of iZōsh with a question / answer session revealing that Opportunity International has been working with some countries for more than 30 years and in some communities they are the only recourse for loans or a savings account. Opportunity International is the third largest bank in Ghana and has more market share than any other micro finance group in the country. She also said that Opportunity International prides themselves on being a resource investing in communities and not an aid organization. 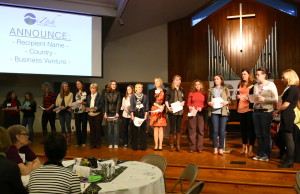 The evening ended with tables voting for recipients to receive funding for their loans. Again, 31 women were funded and $12,353 was donated, bringing the grand total to $61, 519.00 given and 146 women funded. Thank you to the members and guests who attended and participated in another exciting event!