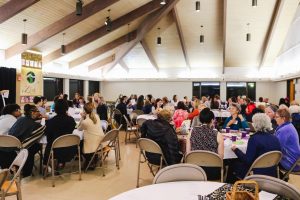 On Friday, October 12, 2018, iZōsh members and guests gathered together at Huron Hills Church in Ann Arbor to learn about and empower women living in extreme poverty. A big part of the evening was funding micro-loans, which allow women in communities around the world to pursue small business opportunities and improve their living situations, educate their children, and reduce the risk of oppression and exploitation of themselves and their families. This is the vision of iZōsh.

The Event began with an introductory video from World Vision called “We Believe In Girls,” followed by a formal welcome from iZōsh Member Bianca Humphries, who mentioned that this was the 16th iZōsh Event of its kind in Ann Arbor. Bianca introduced the night’s theme, Refugees, spoke briefly about the keynote speaker, and pointed out some art from the Samaritas Refugee Youth Art program. iZōsh Member Jill Clair spoke in more detail about the iZōsh organization and its history. After reading the book Half The Sky, a number of women were inspired to try to do something about lessening the oppression of women in third world countries, however small that effort might be. They looked at UN goals of ending poverty in all forms and determined that microfinance should play a role in that. From that beginning, 475 women have been funded to date. Money is spent at the meetings in real time and most is paid back and redistributed as part of a women-helping-women system. The evening’s goal was to surpass the mark of 500 women being funded, and the Event began with $5,785 having been received in advance. 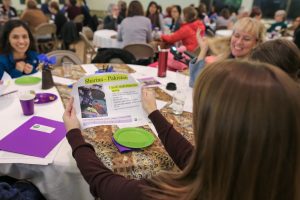 As dues were collected and organized, an ice-breaker discussion at each table asked women to tell about a time when they were away from home for an extended time. As this discussion ended, a video was shown. Titled The Power of a Change Maker, it described through interviews the success stories of women who were change-makers in their third world communities. Jill returned to the stage and announced the results of the stone voting, done by iZōsh members as they arrived. Through that process, micro-loans were approved for women in Kenya, Lebanon, Colombia, and Rwanda. Jill went on to describe how funds are used, mentioning that iZōsh works with non-governmental microfinance agencies to distribute the funds to third world countries. These portals include Kiva, Opportunity International, and Healing Hands of Joy. 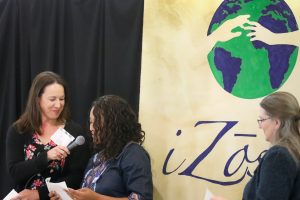 Bianca began the “round two” selection process, pointing out that some of the profiles had green stars, indicating that these women were first timers who were requesting low value loans. These are women who are new to the microfinance concept, just starting the process of lifting themselves out of poverty. She described the idea of savings groups, small groups of women who pool their resources to allow one woman in the group, then another, to begin their businesses, doing more together than they could do on their own. After table voting, attendees from each table joined Bianca on stage to announce the recipients they’d voted on.

Rachel Brock, iZōsh Treasurer came to the stage to announce that $12,844.00 had been given for distribution that night. Then Melodie Marske, iZōsh Education Committee Co-chair, introduced the keynote speaker.

Dr. Jessica Gladden is a distinguished alumnus of Michigan State University who has taught at Grand Valley State and Western Michigan and has spent significant time in Africa, much of it in the refugee camps in Sudan. She began by describing what, exactly, a refugee is. A refugee is a person who has been driven out of his or her home country and prevented from returning, targeted because of their ethnic identity, race, religion, membership in some social group, their political opinion, etc. There are currently 25.4 million people identified as refugees. Until recently, 60,000 to 85,000 a year were resettled  in the US, although that number is now capped at about 30,000.

Refugees who are unable to return to their home communities often end up settling in other countries. Until such time as the new country is ready to accept them, they often end up in refugee camps, where they often stay for many years. These camps are overseen by the UN, but are characterized by cramped conditions, limited food supplies, overcrowded or inadequate schools, no sanitation, and no opportunity to grow food or hold jobs. Refugees cannot work, leave the camp, study above the primary level, or improve their living conditions. Depression is a major problem as these people are literally housed for generations in these “temporary” camps. Coping strategies for refugees include faith and prayer, and informal support systems which involve people supporting one another. Most helpful appears to be finding useful and productive things to do, and this is where micro-loans can help. Small businesses, not sanctioned, but “allowed,” can help women by letting them turn crafts and community activities into educational opportunities, providing useful things to do, and providing a social outlet. 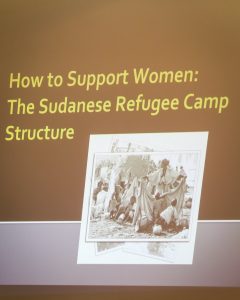 When refugees leave the camp, or relocate to another country, they often feel isolated because they do not speak the language, don’t know their neighbors, lack transportation, have small children at home, and cannot find employment. This is why home businesses are very desirable, and small loans are important in this process. As Dr. Gladden completed her talk, a special guest, Cynthia Kahn was introduced. She is a native of Pakistan who is now a missionary in Dearborn among refugee and immigrant women . She works helping women who cannot be a part of the regular work force to establish small businesses. More information about these close-to-home efforts to support refugees is available at www.refugefornations.com.

Following a brief Q and A with Dr. Gladden, round table discussions were encouraged, discussing individual cases of refugee women taken from the book Women’s Voices from the Margins: Diaries from Kibera, Kenya by Elizabeth Swart.  iZōsh Ann Arbor Chair Katie Glupker spoke about the benefits of membership in iZōsh and announced that a small group meeting would be held Oct. 22 to distribute about $14,000 in Kiva credit (repaid loans). The spring Event will be March 8, when we’ll hear from Dr. Alain Mukwege, currently a U of M School of Nursing Research Associate, on  “Panzi Hospital and the Challenge of Healing Women in the Democratic Republic of Congo.”

The evening’s results were announced. The $12,844.00 collected was spent funding 39 women. 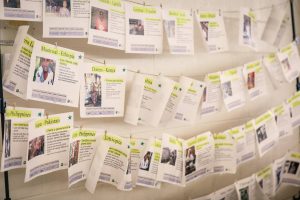 That means that during the 6 1/2 years of iZōsh Ann Arbor, a total of 518 women have been funded, with a total distribution of $192,113.00! When the cheering quieted, Bianca  ended with an appropriate quote from Opportunity International: “Women are a secret weapon in the fight against poverty.”